Environmental Health laboratory of Sumitomo Chemical Company (Japan) published a paper “Comparison of the hepatic effects of phenobarbital in chimeric mice containing either rat or human hepatocytes with humanized constitutive androstane receptor (CAR) and pregnane X receptor (PXR) mice (hCAR/hPXR mice)”. The study demonstrated that the chimeric mouse model with human hepatocytes (PXB-mouse®) responds to rodent CAR activators in a human-like manner, while the hCAR/hPXR mouse does not recapitulate results observed in humans.

Phenobarbital (PB) is known as an agent capable of inducing liver tumors in rodents. The mechanism of liver tumor formation is considered to involve activation of the constitutive androstane receptor (CAR). To overcome the species differences, transgenic mice, hCAR/hPXR, were used as a preclinical model. In these mice the mouse hepatic CAR and/or CAR and the pregnane X receptor (PXR) have been replaced with their human counterparts. However, previously published results were not definitively stating the predictive value of such mice in relationships to expected outcomes in humans. 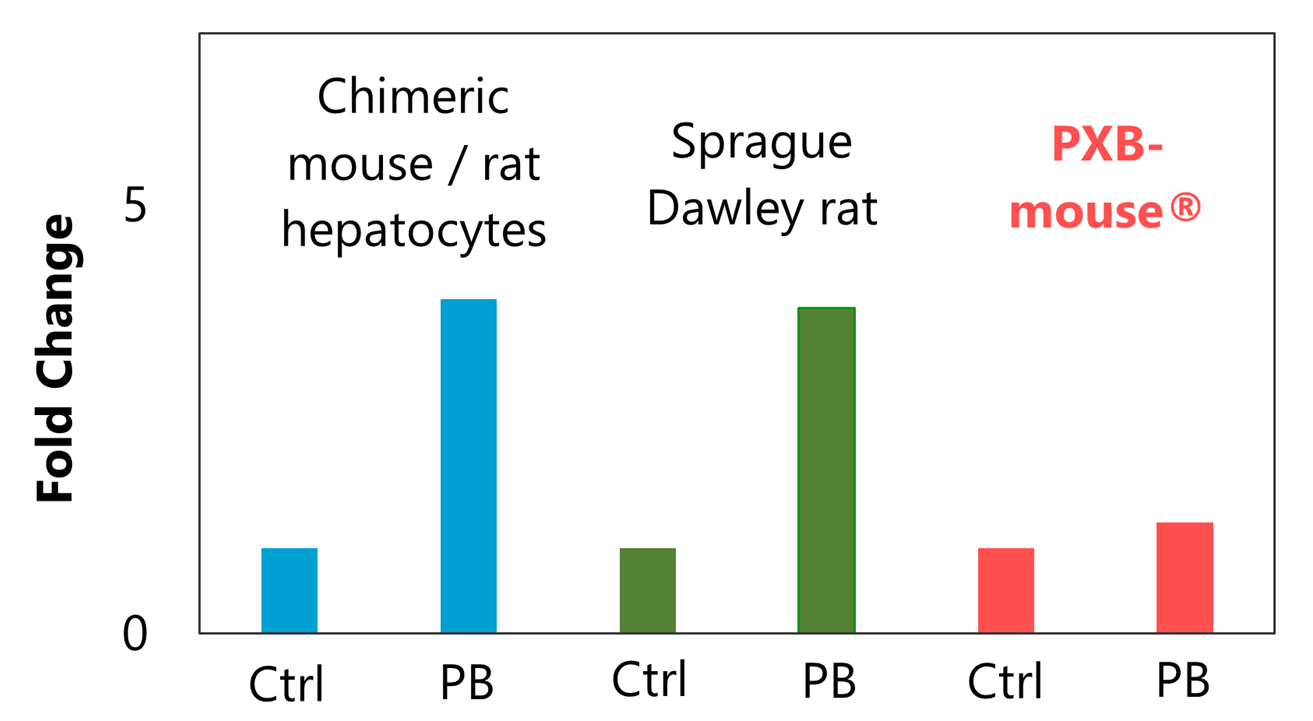 In PXB-mouse® (chimeric mice with humanized liver) the RDS change was not statistically significant, despite high concentration of phenobarbital in plasma. Global analysis of up-regulated and down-regulated genes was performed to evaluate the response of different animal models to phenobarbital. Hierarchical clustering analysis was performed and gene expression pattern of both chimeric mice with rat hepatocytes and SD rats resulted in different clusters than those of PXB-mouse® (chimeric mice with human hepatocytes). These data show the usability of PXB-mouse® and their relevance to human.

Separate set of experiments (experimental setup II) compared hCAR/hPXR mice, wild type (CD-1) mice and PXB-mouse®. Some endpoints of phenobarbital treatment were less pronounced in hCAR/hPXR mice than in CD-1 mice, despite similar plasma levels of PB. Both CD-1 and hCAR/hPXR mice had increased hepatocyte RDS after phenobarbital administration, while PXB-mouse® did not have this outcome after PB administration. Global gene analysis of liver samples was done. Hierarchical clustering analysis was performed, and results show that patterns of the livers from hCAR/hPXR mice after PB treatment clustered closely with those of the liver tumor samples (from a mouse) and then with those of the wild-type mice.

The summary of the publication was prepared by S. Sapelnikova.